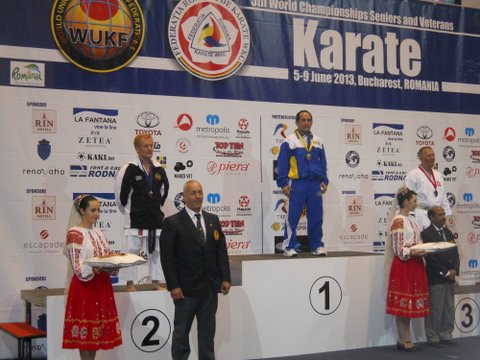 • 6th Dan Black Belt
• SASKA Shihan Kai member
• SASKA Chairman
• WUKF Africa – Vice President
Sensei Laurent was born in 1962 in France and moved to South Africa in 1970. He started karate in South Africa with his son and daughter under Shihan Koos Burger. He is currently a 6th Dan and runs a karate club in Brackenhurst, Alberton where he teaches together with his son Sensei Nicholas who is currently a 4th Dan. They teach both children and adult students. Sensei Laurent and his son still compete at national and international levels.
He was selected as the national coach for the seniors team for the World Union of Karate-Do Federation (WUKF) world championships held in Brazil in 2005, in Spain 2007, in Ukraine 2009, in Italy 2011 and Romania 2013. He is also the Vice President for WUKF in Africa and holds the position of Chairman for SASKA. Sensei Laurent’s achievements at the world championships was obtaining a 3rd place in Spain 2007, 2nd place in Ukraine 2009, 2nd place in Italy 2011and 2nd place in Romania 2013.
When asking Sensei Laurent what his feelings are about Karate, his reply was as follows:
“I feel that the art of Karate is beneficial to all children and adults as it bring confidence towards our life and the challenges that we face. Young or old we all have fears that we may come across in life. Karate helps and trains us to make the best decision be it combat, self defence situation, or any other decision we may need to make. It helps you to think, plan quickly and effectively.
Karate is also Beneficial to ones mental and physical health and improves the core strength of the body.
I see Karate as a way of life; it teaches you self-defence, confidence and discipline. I feel that people who practice the Art of Karate become achievers and live life in a positive way. I believe perseverance is the pathway to success”.
“My best achievement in life is the fact that I have had the opportunity to train with my son and we both obtained Medals in the Karate World Championships.”
Contact Details – Sensei Laurent 082 4942704 brackencobras@absamail.co.za 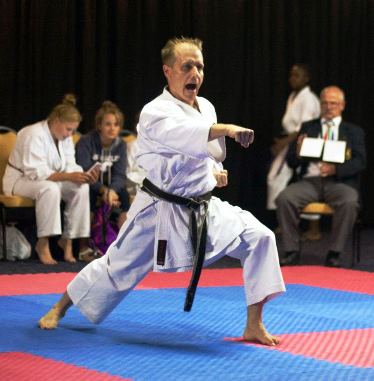 • 5th Dan Black Belt
• SASKA Shihan Kai member
My karate career began in 1989 when I was just five years old. After having just started school, I decided that I wanted to begin taking karate classes too. Now, more than 2 decades later I can honestly say that I have never looked back and karate has become a way of life for me. Currently I am a full time partner at the Cobras karate club in Alberton, where I teach twice a week with my father, Sensei Laurent Gaston-Bellegarde. I enjoy teaching this magnificent art to people of all ages, and I believe that all these years of teaching have instilled certain morals and values within me, for which I am well respected today.
I have competed at various World Championships over the last 10 years and my highest national and international achievements to date, are as follows: I achieved my Protea Colours in 2002 when I was selected as part of the official South African Team to represent the country at the WKF World Championships held in Novisad, Yugoslavia. On an international level my highest achievement to date was winning a bronze medal in the Senior Men’s Shotokan Kata division at the 4th WUKF Seniors and Veterans Karate World Championships held in Lignano, Italy during May 2011.
Over and above teaching karate and also competing, I have refereed at many local, provincial and national tournaments. I became a member of the SASKA Shihan Kai committee in December 2008 after being awarded my Yondan (4th Dan Black belt) by our style head, Shihan Koos Burger. I was awarded 5th Dan in 2105 by Shihan Koos Burger.
My word of advice to aspiring Karateka out there:-Train! Train hard! And if at first you don’t succeed then train harder and let karate become a part of your life, like it has mine.
Contact Details – Sensei Nicholas 082 302 8637 senseingb@gmail.com 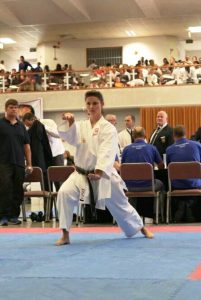 My karate journey began in 1998, when I was 7 years old. After begging my parents to do a sport outside of the school curriculum, I found myself at the door of the Cobra’s karate club at Glenview Primary School, not wanting to leave as we (the girls) were allowed to train and fight with the boys! Now after two decades later, this once idea of sport has become a way of life, pushing me to limits I never imagined I could overcome. Currently, I am an instructor in the junior class where I teach twice a week with Sensei Laurent and Sensei Kaylee. I enjoy teaching this life changing art to a variety of ages, from young children to adults, passing on my passion and I believe that passing on this passion instils unique lifelong morals and values not only in myself but in the students we teach.
I have competed in various local, national and international competitions throughout my karate career. My highest achievements to date are as follows, obtaining my South African colours in Shotokan style, for the years 2009, 2011, 2013, 2016, and in 2018 where I achieved a bronze medal in individual senior ladies kumite (fighting) as well as a silver medal for team rotation fighting in ladies rotational kumite at the 7th world karate championships held in Dundee, Scotland . Over and above the international achievements I have held the best lady of the tournament for 5 years in the senior lady division at our South African Shotokan Karate Association (SASKA) National championships and in addition to competing I am an assistant chief referee for SASKA.
In addition, I currently hold a 4th Dan which was awarded to me by Shian Koos Burger, our style head in 2018.
For any inspiring future karate-ka, karate not only teaches you the art of fighting, but allows you to look inside yourself, whether inside or outside of the dojo, in order to seek perfection on one’s own character.

My karate journey started in 2011 when I was in high school, since then, karate has become a necessary part of my life, teaching me discipline and confidence in myself.
Sensei Laurent and Sensei Nicholas are both amazing karateka and instructors; they truly lead by example, and are part of the reason that I stayed in karate and pushed for my black belt. They have taught me patience and calm in the face of all challenges in my life. Karate has influenced all aspects of my life, equipping me to achieve wonderful things in my degree as well as giving me an escape where I can solely focus on just karate for the time that we train and helps to reset my enthusiasm for homework and work alike.
I now instruct white to green belts in the art of karate, and enjoy teaching people of various ages that they can push themselves and achieve their full potential. My favorite moments in karate are when the karateka that I have had the privilege of teaching are proud of their own achievements whether that be at gradings or at competitions.
My views on karate: karate is about patience, self-control and confidence in your own abilities. Practice karate in all aspects of your life and you will achieve anything you want to.